skip to main | skip to sidebar

Grantham's Defense Year One: Much Room to Improve 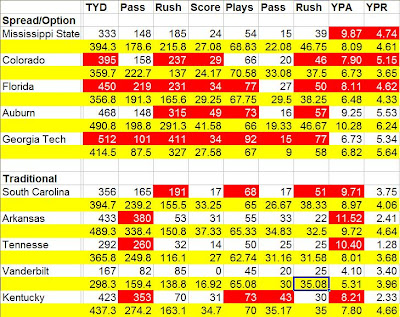 The above graph shows how Grantham's new 3-4 defense performed against the ten "competitive" teams we played this season. I couldn't bring myself to include ULL or Idaho State. In the graph, the statlines in white are our defense's production, and the statlines in yellow are the teams' avg per-game production for the entire season (our games included). Statistics in RED are areas where our numbers were worse than the average defense against our opponents' offenses. What you'll notice shouldn't suprise you if you've been watching the season.

Grantham has some serious work to do when it comes to defending a spread/option attack.

- 3/5 spread teams ran more plays against UGA than their average.

- 4/5 spread teams had more rushing yards against UGA than their average.

- 4/5 spread teams scored more points against UGA than their average.

When Richt first announced the Grantham hire, and that he'd be bringing the 3-4 to UGA, there were two major things pointed out. First, that this would give Georgia a chance to put more athletes on the field to defend the potent high-talent spread type offenses. Second, with only 3-down linemen, the defense could become pourous against high-talent spread type offenses.

The Georgia defense's biggest problem this season? Getting OFF THE FIELD on third down. What does that result in? You guessed it - the opposing offenses getting to run more plays. Against spread offenses, there wasn't a game where any combination of YPA or YPC would result in the opposition not being in position to pick up first downs. That's attrocious. We can chalk it up to personnel to some degree - we definitely haven't had a dominating front-3 which is a requirement of success in this scheme. Still, there were a number of instances (especially versus Georgia Tech) were our guys were in position to make stops either at or behind the line of scrimmage, and the opposition was able to keep moving forward.

5/5 Traditional offenses had LOWER YPC against UGA than their average.

4/5 Traditional offenses had FEWER running plays against UGA than their average.

4/5 Traditional offenses had FEWER rushing yards against UGA than their average.

4/5 Traditional offenses had BETTER YPA against UGA than their average.

3/5 Traditional offenses had MORE passing yards against UGA than their average.

** It is important to know that much of TN's success came in garbage time.

The defense "got off the field" MUCH better against Traditional Offenses

Only two Traditional teams played more plays against UGA than their average, with each running 3 more total plays.

While only three Spread/Option offenses ran more plays against UGA than average, they ran 10, 7 and a whopping 25 more plays than average. When you're looking at a LOW of 4.6 yards per play, that's a whole lot of additional yardage/time to be giving up to these offenses. Also, 4/5 of these offenses ran more RUNNING plays, to the tune of 9,12,10,19 more plays. Again, at a low of 4.6 yards per rush, that's alot of time/yards.

We were told the 3-4 would create more turnovers, and it did.

Last year, the Georgia Defense took the ball away 12 times. This year, 24. The 14 interceptions are up from 11 last season, and we still have a game to go. And the 10 fumble recoveries compared to last year's 1? Well, I guess we got the lucky bounces we didn't last season. What I hate is that there were at least three more (two in the FL game alone) that we DID NOT capitalize on.

It certainly made a difference against GT. Without big Sanders Commings on the edge, Tech was able to rattle off outside runs by collapsing Brandon Smith. I think Smith is a Nickel corner in Grantham's defense, and probably will do better to get alot of work as a speed man on the offensive side of the ball. Grantham and Lakatos want BIG DBs for a reason. As they come in and develop, you'll see a difference on the edge. Also, with bigger, more dominating play on the defensive line, our linebackers will be more free to make plays. That is ESSENTIAL in this defense. We haven't had spectacular line play against the Spread, and indeed, it's difficult to have. When you only have 3 men on the line, you're at an immediate disadvantage to the blocking scheme. Also, the the Spread/Option is an OPTION for a reason. The play isn't designed to go only in one place, it's designed to take what the defense gives it. When you have only three on the line and they aren't dominant, the O-Line can more easily dictate where the ball is going. If you call a Pinch, the line can collapse it, the QB can pull the ball out, and take it around the end. If you rush hard contain, the dive will be there. Having a stal-wart D-Line is paramount. This will be Grantham's primary focus of the next four weeks.

This ain't the NFL

Grantham had been in the NFL for 10 years. In the NFL, he faced traditional pro-style offenses on a weekly basis. Now, he's in the SEC. He is going to have to work to alter his scheme to stop the spread/option style defenses he will see. Next season brings similar challenges. We still have FL, AU, MSST, and GT on the schedule. We lose spread-style Colorado and traditional-style Arkansas. We pick up Ole Miss, who could be either offense in 2011, depending on who Nutt has at QB. We'll also face Boise State who is a pro-spread team. So, we'll likely have a 50/50 traditional/spread split again or perhaps even 40/60 favoring the spread/option style.

The mark of improvement usually happens in season 2

There is a great deal of evidence showing improvements in second seasons for head-coaches in the SEC. Let's hope the same holds true for defensive coordinators. Richt, Meyer, Saban, Miles, Chizik...all had great success in year 2. Hopefully Grantham will get to work on recruiting, signing, scheming and teaching...because we have to be much better in 2011. We just HAVE to.

Grsnthams history is not good as a d coord.

I am not optimistic he can get the job done..Look at what Diaz from MSST did.

I do not follow the Mississippi State Bulldogs, do I don't know much about Manny Diaz. I know this...he is a co-defensive coordinator with Chris Wilson. I know they improved the MSU scoring defense by 6ppg.

That includes wins over Georgia and Florida and a loss to Auburn. Now, MSU played Georgia before Georgia had AJ Green back, and that made a big difference for them. Still, their defense has given up 20 ppg, only 2 points better than our 22.

The fact that there has been any improvement on our defense is good. The D could very easily have fallen far backward this season. They did not. Ogletree has gotten better as the year has gone along. So has Marcus Dowtin. So has Sanders Commings. So has Brandon Boykin.

I haven't dug too deeply into defensive player statistics yet, so I can't tell you how the boys are performing compared to last year statistically. I'll do that later - probably later in the week.

As for Grantham's history as a Defensive Coordinator, you're talking about his performance a number of years ago as DCoord of the Cleveland Browns. That was hardly an All-Pro defense he was working with. The play of his position personnel in Dallas was pretty damned good. I'm sure he's learned a thing or two since Cleveland.

It's easy to talk trash about a 6-6 team. It's easy to say the new coach sucks just because the season hasn't played out how we wanted it to. Stil, I maintain that in the first year of a brand new defensive scheme, the first year with a new coaching staff, there are going to be growing pains.

Oh, and as for the "Better Athletes" comment that you and so many other people like to make...it's time to get past the thought that recruiting rankings mean much. All SEC teams can get decent athletes. MSU may not get as many 4-stars as UGA does, but as long as they get the production out of the ones they get, that's all they need. Most of the defensive issues for UGA this year have not been athletic issues. They've been issues surrounding learning a brand new defense.

The second season will likely surprise you.

Dukes, so what you're saying is that UGA needs to go to the spread? (:

Ben Dukes
I used to play Georgia Football...now I write a whole lot about it. :)

Check Out What I'm Up To These Days